Having worked with education for more than forty years, certain moments I’ll never forget. One such was when I was giving feedback on a poster assignment and tried to explain to a student why I disagreed with her choice of typeface. I must have been talking for pretty long (too long, she obviously thought) about how the visual language of the lettershapes was very different from that of the artwork, without this contrast really adding anything meaningful to the composition, when the student interrupted my monologue, asking: ”Is it really so important?”.

For a few seconds, I didn’t know quite how to respond, then uttered something like ”well of course, nobody’s gonna die because you chose the wrong typeface so I guess it’s not that important … on the other hand, if you wish to deal with communication on a professional level you should learn how to make meaningful choices, and combining your illustration with a different typeface might have helped getting the message across more effectively”. 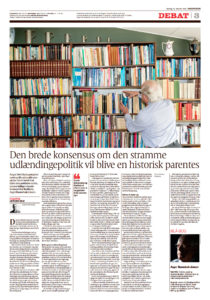 Looking at this page from today’s Politiken made me recall this experience from long ago, as I suddenly saw myself in an imaginary discussion with those responsible for the page, concerning their choice of illustration – in this case, a photograph.
The story is an interview with a retired Danish politician who disagrees with the Danish immigration policy and the headline quotes his main point, saying “The broad consensus on a strict immigration policy will end up being a parenthesis in history”.
I assume that the person in the photo must be the interviewee; however, my assumption is merely based on the fact that if it were a different person, this photo would make even less sense. Nowhere in the interview does Asger Baunsbak-Jensen refer to his library and his apparent fondness of literature is not mentioned, not even hinted at, in the story. The photo does not let us know what he looks like or suggests what mood he might be in, it only shows an old man picking a title from a bookshelf. As the name of the book cannot be read, its potential relevance to this interview about immigration policy remains a mystery. And as the image is not accompanied by any explanatory words (the caption only tells us the name of the photographer), interpreting this photo becomes pure guesswork.

Now, in my imaginary discussion, the editor – or maybe the photographer – will ask me the same question as my student did, many years ago:
”Is it really so important? This is a beautiful, intriguing photo that will make a lot of loyal Politiken readers appreciate what a visually daring newspaper they subscribe to. Do you really find it so terrible that it makes no sense in relation to the story?”

But this time, my answer comes without hesitation: Yes, it IS important!
Some readers may look at the photo and try relating it to the story. A lot of these readers will probably get the impression of an old man who sees the world through his books and who is out of touch with what’s really going on out there. In the eyes of some viewers, Baunsbak-Jensen’s posture and the combination of his long, white hair and increasing baldness will make him look slightly ridiculous. Of the readers who pay attention to this photograph, I am pretty sure that it will make very few of them more positive towards Asger Baunsbak-Jensen and his points of view than they already were; more likely, the photo will make most of them less inclined to agree with him.

This is concerning the group of readers who will notice the photograph at all and try to interpret it. They are probably a minority. My guess is that most people won’t even look at this image for long enough to start looking for a message. At first glance, the photo appears to have no relevance to the story, and getting pointless visual impressions is nothing new to us; in fact, we are bombarded with images of no particular importance every second of our waking life. This just becomes one more. We’ll move on to something that makes sense.

If I’m right, that turns Politiken’s choice of illustration into a mere waste of space and paper. And yes, that IS important.